The winds of change seem to blowing through a number of health and other charities. This freshening breeze is moving them away from ‘doing things for and to’ people towards greater partnership ‘with’ patients, carers and the public. This creates a climate that is more centred on the lived experience and knowledge of people affected by a disease, condition or illness.

This approach is welcome news for many of us who want to have more of a say and see real change from the charities we support and the way we lead our lives.

A recent article in the Guardian by @bensummerskill highlighted a number of the reasons that may lie behind these changes but for some charities it is simply seen as the right direction of travel. Charities that have a strong partnership ethos should be commended as I noted in a previous blog about Diabetes UK.

Bec and Derek (Bec Hanley and I) had the pleasure of working at Parkinson’s UK in London with their User Involvement team at the end of July this year. It was really interesting to meet the group, find out what they are doing and learn from their experiences which are innovative, inclusive and imaginative. 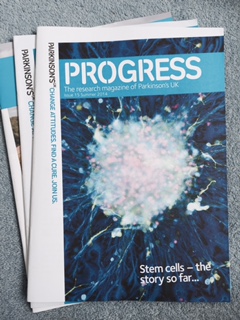 Parkinson’s UK published an edition of their research magazine in 2014 that was actually guest edited by the partner of a person with the condition.

The title PROGRESS even makes it sound interesting and something I want to read. Its content is as much about all the people who make research happen (from patients to researchers), donations (from fund raising to brains) and the research (from practical living to stem cells).

Likewise, their quarterly member magazine, The Parkinson, has an editorial board which includes people affected by the condition and they have also started guest editing, having a chosen user guest edit the Summer issue.

This is joined-up thinking as are all of their information resources, which are systematically tested by users before publication.

The User Involvement Advisors we met, a small and well-formed team, are actively involved in a wide range of activities with volunteers, fundraisers, staff, patient groups and communities. (The list written up on a flip-chart appeared endless so it will be good to se it typed up and circulated.) They are well supported in their work by Luis Perpetuo, User Involvement Manager.

Three of the team of four User Involvement Advisors are affected by Parkinson’s themselves, and show a commitment and compassion that is almost beyond measure. It was good to see that people whose voices are seldom heard have a presence and are central to user involvement at the charity.  I was pleased to see too that handling compliments and complaints are part of the team’s remit.

This commitment and compassion is equally true of people with other conditions yet what struck me most was the strength of feeling about the genuine nature of the relationship between the team and the organisation. There was an authenticity in the discussion that made it evident that there was real impact. 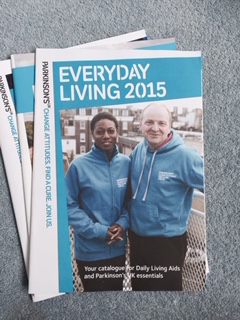 The  User Involvement Advisors spread the word about Parkinson's, talking to local patient groups and to the charity's fundraisers. They promote involvement with the charity to their peers, which has a different impact compared to other members of staff doing the same.

You can shop here

On the more unexpected level they have also developed significant photographic modeling skills of a tasteful nature as demonstrated in the magazines.

Thank you and keep up the great work!

THE QUESTIONS TO ASK OF ALL CHARITIES

What questions might this raise for the public who are engaging with other charities?

·       How is research forming an accepted and everyday part of a patient's journey?
·       How are you raising awareness about the need and value of research?
·       What are you doing to let me know about research studies that I can join?
·       Do you have a patient/carer reader's panel for the articles that are published in your organisation and on your website?
·       How are the views of patients and the public informing and shaping the work of the charity?
·       How are people with direct personal experience actively involved in the policy making and practice of your organisation?
·       Do you employ staff affected by the condition who may add to the effectiveness and understanding?
·       Do you have a patient as a guest editor for any of your publications?

If you are doing some or any of these I would really like to hear from you...

First response from Jon Spiers from AutisticaUK - A great website with good information about research http://autistica.org.uk

Posted by Derek online at 11:12 No comments: